A stroke can either be a ischemic stroke, a hemorrhagic stroke, or a stroke due to a tumor. All 3 types of strokes bear the same signs and symptoms. 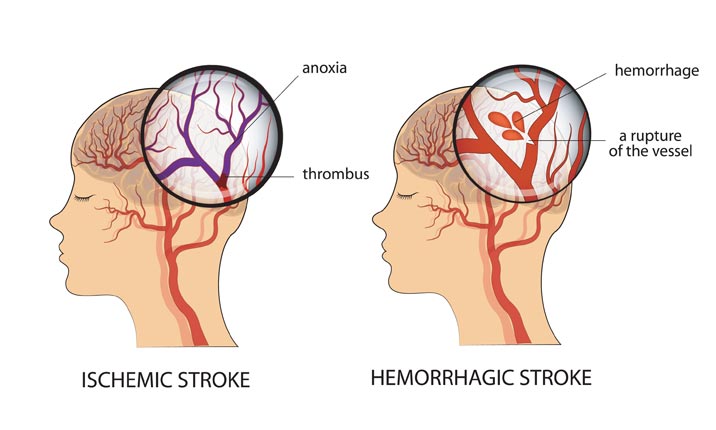 Take a look at the left diagram where an ischemic stroke is illustrated: It clearly shows that a lack of blood flow to the brain occurred due to narrowed arteries, which eventually forms a clot in the arteries that feed the brain.  Contributing are smoking, poor diet, lack of exercise, and stress.  The right diagram shows a rupture in an artery that feeds the brain blood.  Ruptures commonly happen due to high blood pressure, which pushes against the walls of the artery, eventually causing it to fail and rupture.  Instead of blood reaching the brain, it leaks out of the artery, failing to feed the brain the blood it needs to function.

Asprin is to be avoided during a stroke.  Many may assume that the stroke is due to clogged arteries (ischemic stroke).  Let’s just say for a moment that it is true: The patient is suffering from an ischemic stroke.  If you had administered Asprin, you would of likely saved their life: The Asprin thing out the blood, and reduces clumping action at the clot, allowing more blood to pass through the clot to feed the brain.

However, if it was a hemorrhagic stroke, Asprin can be fatal.  Thinning out the blood when there is no clot, but a rupture can (and will) make the situation much, much worse.  Because an aneurysm is due to a rupture in the artery wall, Asprin will simply cause more bleeding.  And because a first aider cannot distinguish between a hemorrhagic stroke and ischemic stroke, The Canadian Red Cross strongly advises NOT to administer Asprin.  Instead, call 9-1-1 to get them to the hospital ASAP for the quickest intervention possible.

Want to learn more on how to save a life?  Call The Academy for First Aid and Safety now at 1-877-659-3215 or visit www.academyfor1staid.ca and join one of our many first aid and CPR classes!  We have weekday and weekend classes, and are WSIB approved!